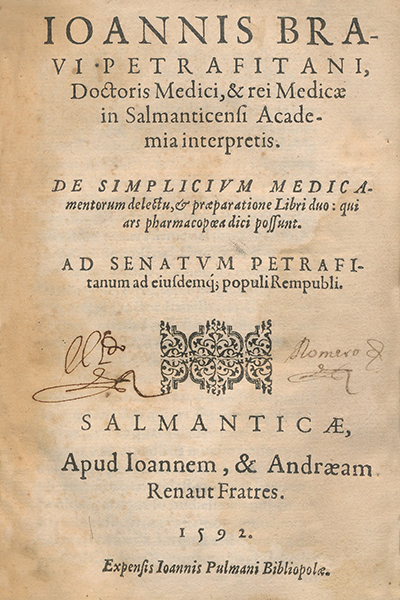 Juan Bravo was one of the most prominent representatives of Salamanca's medical humanism. Born in Ávila, he studied Medicine in Salamanca and after finishing his degree he practiced his profession in his native town for some years. In 1560 he returned to the University of Salamanca to occupy the chair of Articela and later took over that of Avicenna from which he carried out his teaching activity until his retirement in 1597.

He published various works, the first of which was a monograph dedicated to the causes and cure of rabies called De hydrophobiae natura (1571). His concern for the recovery and understanding of classical texts led him to review two works by Hippocrates and Galen, In Hippocratis Prognostica Commentaria (1579) and In Libros Galeni de differentiis Febrium Commentaria (1596).

In 1583 he published the semiological treatise De saporum et odorum differentiis dedicated to the pathological meaning of smells and tastes. And finally, two works on therapeutics, the first dedicated to the purgatives De curandi ratione per medicamenti purgantis exhibitione (1588) and the second, De simplicium medicamentorum (1592), a small pharmacopoeia dedicated to the selection and preparation of simple medicines.

The acquisition of this publication has represented a valuable contribution to our collection as it is a rare work of which not many copies have been preserved throughout the world.